Welcome to Fundies! Here you can discuss, vent about, or bash fundamentalists of all persuasions. That means pagan fundies, too.
Post Reply
12 posts • Page 1 of 1

We haven't had a good fundie link in a while, this one is steaming me up a little.

What I really can't understand is how tis is not hate speech. This is not "I am intellectually discussing and critiquing a lifestyle choice" (A term I disagree with regardless) this is incitement to violence.


And you can spend some time on the actual churches website, equally scary.

http://www.faithfulwordbaptist.org/index.html
Be who you are and say what you feel, because those who mind don't matter and those who matter don't mind.
Dr. Seuss (1904 - 1991)
Top

Who wants to take Ragnar's place and have this reported, taken off the internet, and the church investigated?

Cuz you know, the moment you outright say "kill," it is a threat. Anyone have numbers?
Crazy Healer Lady
Health and happiness to you!

I wish I had the numbers... this guy really does make me sick!
Trying to create a world, even in words, is good occupational therapy for lunatics who think they're God, and an excellent argument for Polytheism. -S.M. Stirling

MAybe some people in the states would know, one of the larger human rights groups there maybe?
Be who you are and say what you feel, because those who mind don't matter and those who matter don't mind.
Dr. Seuss (1904 - 1991)
Top

I hope I don't seem radical, but I forewarded that crap to the FBI. :/ They handle all of the cross-internet crime and stuff around here. It's not so easily reported as one could think of typing it in a report link and heading it up to the IP and such.
They can't be reported by such common means. And this kind of crap is so motivated to the point of driving people to actually listening to him that- I'm just DISTURBED by it all! O.o

In lieu of th this, I hope that they get this filth off the internet atleast, but I can only hope. The man on the phone (local FBI office) joked with me like:
"And he said he was a Minister?"
"Yessir." (Tinted accent. I'm sorry, but I think you would have one to if confronted with dialing up the FBI!)
*Investigator's chuckle*
"Doesn't sound like any Minister to me. So do you have the sites?"
And so on.

But he heard the audio I was playing in the background and told me to foreward it to his office. If he IS stating people to go out and kill people, he deserves whatever he was wanting to dish out. At least his *self-censory* taken off the internet. I don't expect it to escalate any higher than that though. We can only hope from this point.
"Water, water, everywhere,
And all the boards did shrink;
Water, water, everywhere,
Nor any drop to drink."
Top

Woot! Thanks, Hytegia! Not radical at all. This jerk is motivating people to KILL. Good on ya, man. 5 gold stars!
Crazy Healer Lady
Health and happiness to you!

Looks like this guy may not be around that much longer. Not only is he advocating killing gays, he wants his followers to go after Obama too. (LINK) I think the FBI and the Secret Service may have some objections to that.

"One of the parishioners who attended Sunday night services at the Faithful Word Baptist Church was Christopher Broughton.

"I actually moved to the area because this church was preaching the message I believe in," said Broughton.Broughton had an AR-15 semi-automatic assault rifle outside President Barack Obama's speech to the VFW at the Phoenix Convention Center earlier this month.

The night before the speech, on August 16th, Broughton listened to Anderson's "Why I hate Barack Obama" sermon. "I concur, I think we'd be better off if God would send (Obama) where he's going now instead of later," said Broughton. "(Obama) is destroying our country."

When asked if he was advocating violence against the President, Broughton said he wouldn't answer the question directly. "I don't care how God does it, I'm not going into further detail than that," said Broughton. "It would be better now than later."

Now I dislike Obama as much as the next reasoning person, but vote him out, not shoot him down. As ex-military and, I believe, averagely patriotic American, I would still see it as my duty to stop any assassination attempt.
I'm living in the Shadows and the Night,
Wrapped in warm darkness, safe and sure.
My Path shines by the Moon's fragile light,
It frees my Mind and keeps my Heart pure.
Top

This is so scary

What an idiot - I don't think I need to say much more about him that that.
"I am not young enough to know everything." Oscar Wilde
Top

Me and a co-worker were looking through and laughing at this church's site.

First off is that THIS is their Church, a storefront in a strip mall. 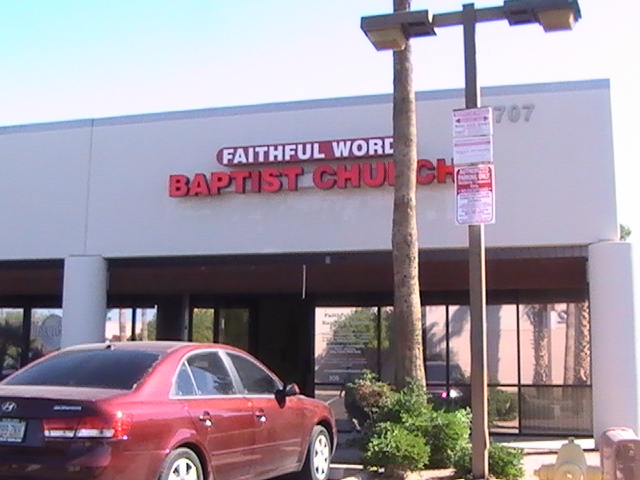 Next, this guy doesn't even have a degree in theology, and, in fact, never attended a college or seminary.
His qualifications are that he has memorized over 100 chapters of the bible, and went door to door to "save souls".


Lastly, apparently it is a sin that women go to male OB/GYNs. Male OB/GYNs are perverts who attended medical school for the sole purpose of looking at women's intimate parts, and the women who go to them are feeding the perversion.
I'm living in the Shadows and the Night,
Wrapped in warm darkness, safe and sure.
My Path shines by the Moon's fragile light,
It frees my Mind and keeps my Heart pure.
Top

Worst possible advice ever for a faith that creates female-specific diseases... "I hate my female parts. They make me evil. What? Why do I have ovary cancer/cervical cancer/pain/cysts/infertility?" When you pour that much hate, negative energy, or just plain neglect into a certain area of your body, it's pretty darn likely you're going to get a disease. So, of course, the most reasonable thing would be to NOT look after yourself, too. So I guess women should all have home births alone in a closet with no pain killers or help, because, you know, those dirty doctors only went through a decade of schooling to get a peak under your shin-length skirt...
Crazy Healer Lady
Health and happiness to you!

Don't even say it in jest, Crazy. This guy may actually take that seriously...

Trying to create a world, even in words, is good occupational therapy for lunatics who think they're God, and an excellent argument for Polytheism. -S.M. Stirling

Ironic statement of the year "Speak out against intollerence. It is the American way". (Top right on the link).

Site is not aimed at Germany in particular or Europe in general. If it was I would report it.

Users browsing this forum: No registered users and 3 guests